I recently renewed my fascination with Lewis Carroll’s Alice in Wonderland and in my rather misguided attempt to share this rediscovered wonder, I decided to read the story to Little Bear.

”I can’t remember everything, Gram. Just draw a story on my back. But not Alice.”

Ever since I can remember, Little Bear has wanted me to draw stories on his back at bedtime. It may have started with the oldest. I think it must have. There’s no set story. I make it up as I go along. Unfortunately I don’t always remember the details. Chapter One: I’ll begin and ramble along – much like the Alice crew actually – and when I’m asked for Chapter Two at the next bedtime, I struggle to remember the story line. Not Little Bear though. He is like my own personal  nag/critic reminding me every time I fumble a detail.

I thought I pulled a fast one on him last night. I drew Chapter One: Down the Rabbt Hole on his back. And threw in a few teasers from later chapters. I figured he’d chuckle when they threw the baby around the kitchen only to discover the baby was a pig. And he did!

”Good trick, Gram. I know that’s the Alice story. No thanks. Just draw some words on my back and I’ll guess them. That’s what mom does.”

Little stinker. He wouldn’t have it said he enjoyed the story but I bet he’ll have me pick up where we left the next time he spends the night!

I had told him a little of the Cheshire Cat earlier in the day. I’m painting a set of nesting tables and am adopting some ‘wonderland’ details.

”Did you paint that cat, Gram?”

But never one to leave well enough alone, “Did you make it up yourself or did you copy it?”

What could I say?

Twice-loved. Alice, the little table, and the copied cat.

Stopped at my first yard sale for the season just a couple weeks back. House-front yard sales are the best! Especially if the house and residents look a little bit older. Chances are they’ve lived with their ‘junk’ for a long time and are approaching that stage where one feels the need to downsize. What was once quite lovely and/or useful is now entering the clutter/junk/I need to get rid of stage. And that’s where I find my ‘treasures’.

Found these tools in a plastic beef bucket and at $2.00 apiece, I didn’t even quibble.

Here I have a soldering iron – you’d heat it over open flame – and a hollowing plane. The drywall trowel is nothing particularly special but I saw Dad use these so often I brought  it home for sentimental reasons. But all are Clydesdales. They’ve seen more than their share of work. Oh the stories they could tell! Boats they’ve built. Homes they’ve helped raise. And here they are today – put out to pasture – but still twice-loved by me – though purely as an art form. I’m not about to build any boats this week! 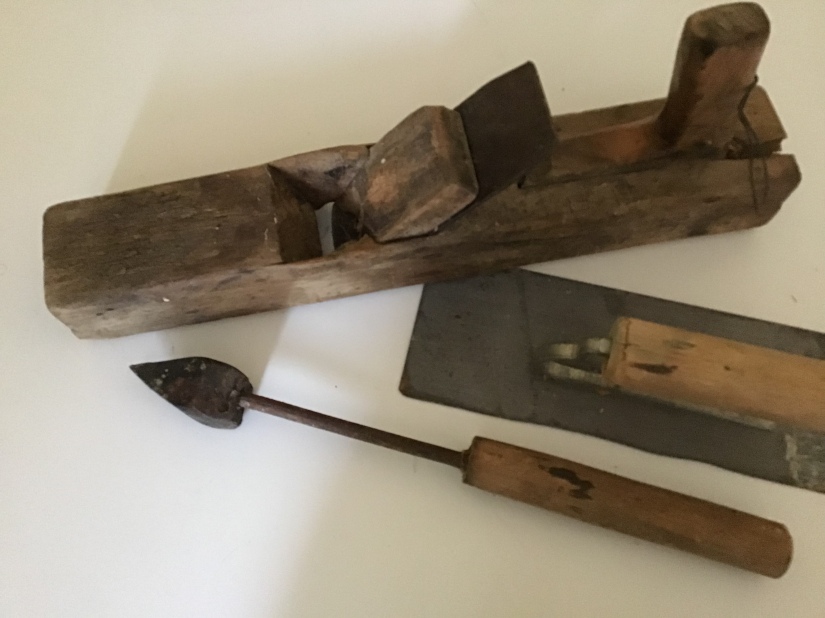 This one here, though, this is the piece de resistance. Not quite sure what it’s called so we’ll refer to it as a thingamajigger for now. I think it was used to draw out the seams and/or run the oakum into the seams of a boat. If you know the name of it, or can provide further information, I’d love to hear from you.

I think the old saw-horse has seen a little use too!

This is where I live …

I read somewhere recently that we were put on this earth for one purpose only and that is to experience joy and happiness. That is when we are ‘in sync’ with who we truly are, when we experience joy.

Initially I was sceptical but I am becoming a believer.

There is very little joy in envy, hatred, revenge, resentment, regret, anger, inadequacy – nothing here to make you feel good.

It is when I am doing the things I like, enjoying my world and my people, creating my own little space, that I feel joy. Still, my thoughts will insist on wandering to those dark corners – and sometimes I allow them to crawl there and wallow, though I know I shouldn’t. To bring myself back, I create. Makes me feel good and when I am ‘in sync’, good things happen. I especially like to bring a new look, a new feel, to the old and discarded. Twice-loved. There is beauty in all things if we only but look beyond what is obvious.

Found this photo frame in the attic and now two of the five frames are actually mini chalkboards. I love the bright sunny yellow. The table is one of a set of three I restored with a simple coat of paint, and the clock – not working – is just too pretty to throw out. Beside it, one of my ‘Alice’ cards, featuring the White Rabbit.

I recently had a birthday. I won’t say ‘celebrated’; ‘appreciated’ might be a better word. Seems that as you get older you approach birthdays with more caution than anticipation.

Little Bear’s birthday is the day after mine. Two birthdays. Twice loved. He’d been counting down the days for weeks. His birthday was most definitely a celebration: friends, presents, cookies, cake, attention. What more could a little boy ask for? Mine is more of a “Phew! Made it through another one!”

I do have a fondness for clocks though, if not for the passing of time. I don’t share that much. I once had a fondness for nutcrackers. That I did share and then every Christmas for years, that’s what I got. Nutcrackers. And more nutcrackers. Year after year. I vowed I’d never collect anything again. So I keep quiet about the clocks. Tick tock.

Time comes with so many interesting connections. But my favorite has to be the whole Alice thing. Whoosh, down the rabbit hole she goes where everything is topsy turvy and nothing makes sense and everything makes sense. “The hurrier I go the behinder I get!”

I bought myself a clock for my birthday. I’ve been eyeing it for months. $ 14.99. Not expensive but so very much a nonsensical purchase. That’s why I waited for my birthday. I can justify my foolishness … sort of.

It’s not a wind up. They probably cost an arm and a leg now. It’s battery powered, but I like the look of it and I love the colour. Such a pretty green.

Happy Birthday to me.