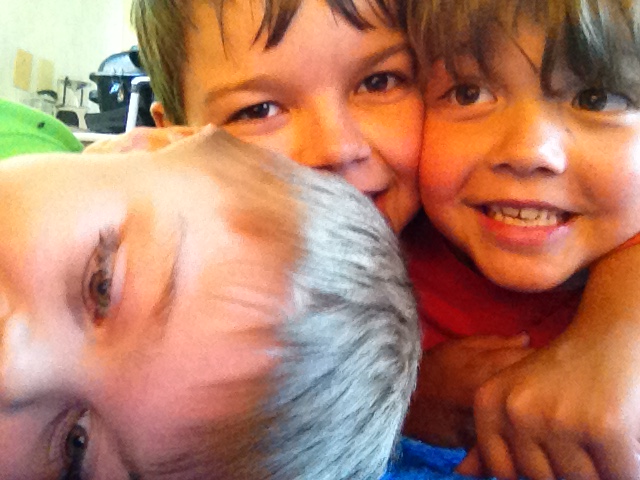 Yesterday I passed the three Ronnies on the road, walking along – all by themselves. I pulled over and they came running. “Hello Gram.” Hugs and kisses all round ’cause that’s the kind of crowd we are.

“Where you guys headed?”

Now it’s beyond me to figure out what goes on in the mind of a child. Why you would head off to the restaurant without a penny to your name is indeed puzzling; however, they seemed happy enough and the oldest had a phone to stay in touch with Momma. The middle guy proudly informed me he was wearing just a hoodie, no winter coat, and Little Bear was so excited he was skipping all over the place in his sneakers – no boots – but with a ‘two sizes too big’ toque pulled way down over his wee ears. Anyway, I gave them twenty dollars which doubled the excitement (they were actually going to a restaurant with money now!!) and told them to call me when they got there.

Then I went home and sat on pins and needles, just able to restrain myself from driving up and down the road, because that’s what Grammys everywhere do when the cubs go off on an adventure.

Finally they called. They had placed their order: Clubhouse dinner, Santa Fe wrap and a gumdrop muffin. ( I had been thinking along the lines of three small orders of fries!)

I laughed. “What? You don’t have enough for that!” I was hardly out the door when they called back. Momma was on her way to the rescue so I could go back home. Which I did. I’ve been chuckling to myself ever since. Oh to be a child and travel through this world so innocently yet so supremely confident in all you do.

That said, methinks a math lesson is in order.

View all posts by Jean